Since the beginning of the COVID-19 pandemic and after an initial dip, the stock market has performed exceptionally well for such an economically uncertain time. The SPDR S&P 500 electronically traded fund (ETF), which provides a good indicator of the stock market’s overall performance, has increased in value by 32% year-over-year (YoY) and 39% since the beginning of January 2020.

While these returns are impressive, the performance of bitcoin has surpassed expectations and greatly exceeded the performance of the S&P 500. Bitcoin’s value has drastically increased by 554% since early 2020 and by 352% YoY. As the following chart highlights, these are far beyond those of the stock market and likely any other asset class. Bitcoin’s price during this time rose from $7,175 and $10,382, respectively, to $46,898.

ATMs have helped investors gain access to bitcoin. Ubiquitous access to these ATMs has enabled investors at all levels to reap the benefits of this growing asset.

Investors rewarded throughout the pandemic 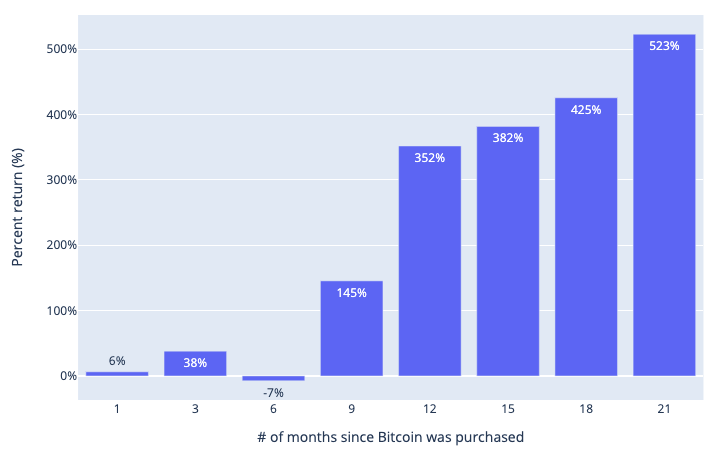 Excluding the period of six months ago, individuals who purchased bitcoin at any of these periods made gains averaging 267%. Although the prices decreased approximately six months ago, hence the return of -7% if it was purchased then, the price has been steadily rising again and may reach its peak again soon.

Even before the pandemic began, Bitcoin started finding its way into the portfolios of retail and institutional investors. Bitcoin’s performance during the past year and a half has created a positive feedback loop, skyrocketing from $7,175 to just above $63,000 at its peak–a price it may very well reach again soon. Cash2Bitcoin is a key enabler of this uptick in the United States, having deployed over 400 Bitcoin/crypto ATMs across the country.

Unlike acquiring bitcoin through online exchanges, using Bitcoin ATMs requires no more technical savvy than using a traditional ATM. This has reduced barriers to entry for retail investors at all socioeconomic levels, and therefore has allowed many more individuals to profit from this investment.

Analysts attribute bitcoin’s price increase to a wide variety of factors. Particularly during the pandemic, as inflation with many traditional currencies has crept in, investors have sought currencies and assets that cannot increase in supply, thereby dropping in value. Bitcoin, for instance, has a maximum supply of 21 million coins, just as the supply of gold is limited to what can be mined. Furthermore, many companies have begun holding bitcoin on their balance sheets and/or accepting it as a form of payment, such as Tesla, Newegg, Microsoft, AMC Theatres and Square. To keep up with this demand, some payment processors, such as Paypal, have announced or already enacted plans to facilitate payments between customers and vendors using bitcoin.