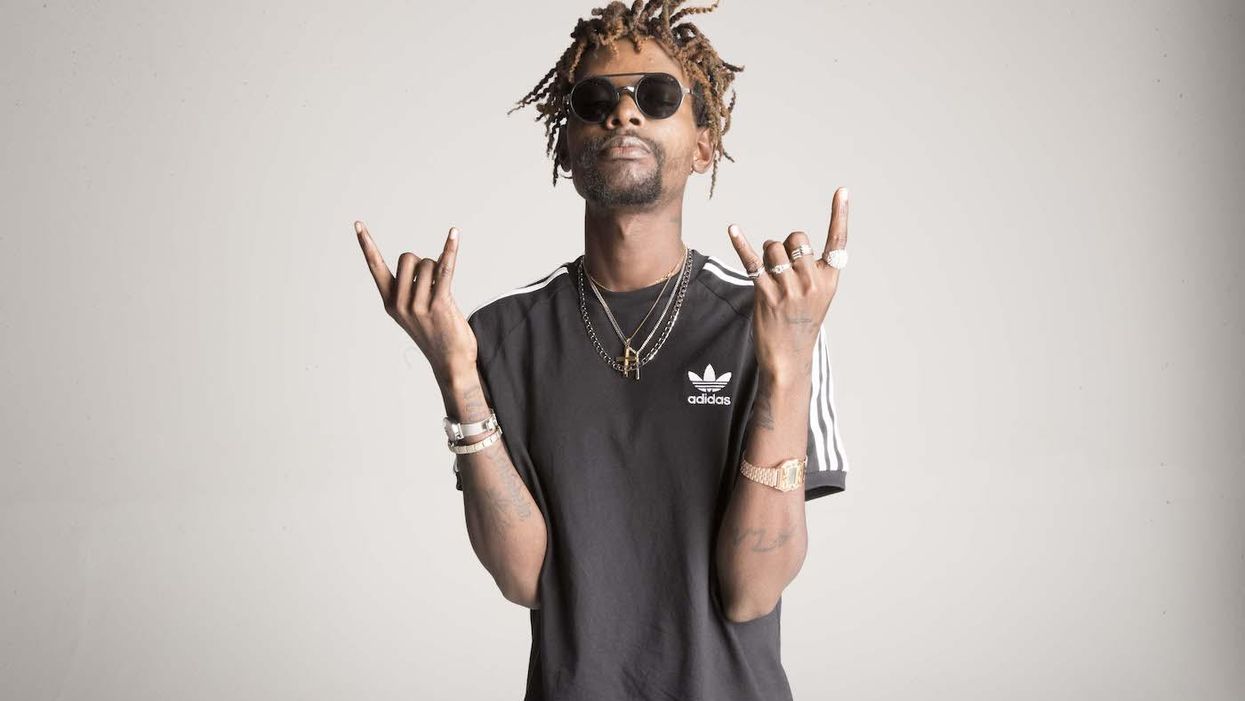 Ranks ATM demands to be taken seriously. With every successive release, listeners are bound to pick up on both his personal and artistic growth. His latest EP, Substance Music, released towards the end of 2020, is an honest body of work that sees the artist divulge some aspects of his life while remaining playful and entertaining.

Young2unn, who produced a majority of the project, gave Ranks ATM beats that primarily consist of keys and strings cushioned by atmospheric pads and ethereal vocal samples panned for effect. The music is soulful enough for Ranks to tell his story and gritty enough to maintain his street aesthetic.

On Substance Music, the artist strikes the balance between playful banter and poignant expression of emotions. It’s what makes his raps believable in general—he presents himself as a complete human who feels pain at times but also feels himself. Songs such as “Die For Me” and “How Could It Be” are laced with specific details that could have only been extracted from his life experiences, for instance, on the former, he raps, “You cheated on me with a gym freak, you did me dirty.”

The likes of Emtee, Riky Rick, Saudi, Just G and Stilo Magolide are some of the guests that add colour and variety to Substance Music. As a result, every song on the EP sounds distinct and all the songs connect like a jigsaw puzzle to give a snapshot of Ranks ATM’s life on and off the mic.

He’s neither ashamed nor apologetic about his vices (“Chase The Fade”, “Kodeine Babii”) and is open to admit money was tough in the not-so-distant past. In “How Could It Be,” the project’s opening song, the rapper sincerely recalls the come-up and reveals his family, especially his mother, is his main reason for hustling. He does this over fitting production by seasoned producer Ruff (Emtee, Sjava, Amanda Black etc.), who also mixed and mastered Substance Music.

Substance Music is an addition to a catalog that’s tracing the trajectory of the artist in real time. His debut EP, For The Skreets (2019), a collaboration between him and super producer Tweezy, built upon the momentum his street anthem “Asbheme” created—as the title suggests, it was a street-centric project that introduced Ranks ATM as a rapper who repped the streets. After all, he’s a member of the pioneering collective ATM (African Trap Movement) of Sjava, Emtee, Saudi, Just G, Lolly, Sims, etc. (Read more about ATM here.)

In the interview below, Ranks ATM discusses Substance Music, the future of ATM, the importance of rapping in his language siSwati, telling honest stories, getting a co-sign from Riky Rick and more.

This interview has been edited for clarity and length.

What does “Substance Music” mean?

It means music that’s driven by passion, or that’s pushed or fueled by something behind it.

In this case, what is that something?

In my case, the substance is a lot of things. For example, the last song called “Oh Why'”, the substance behind that is me being heartbroken and losing my girlfriend. That’s what motivated me to make that song. That’s the substance behind it, that’s what fueled me into making that song. The substance is where I came from now, you know what I’m saying? Like how I said, I wish I can take my mother out for lunch and dinner, it’s because we ain’t never had that in a very long time, because my substance that drives me, the money was not there. The people did not really believe in me like that. So that’s what pushes me to prove to myself, not anybody else, that I can take that negative substance and turn it into something positive.

Tell us about your relationship with Young2un, who produced most of the project. How did you get to work with him?

So, there’s a guy called Stunna, he was part of ATM before moving to Ambitiouz. After we moved to Midrand and went to do Ambitiouz business, he opened a company called Jozi Empire. He signed Young2un as a producer under his company. So me going to his studio, passing by, checking what’s going on, I bumped into Young2un. He was making the fire beats. I stayed pulling up on Young2un day in, day out. That’s how my relationship with him started. He’s willing, he’s energetic, and he’s passionate about it day in, day out. No days off. He has a whole lot of work out with other artists too, he probably has a whole project with Stilo. He has a whole project with Saudi. He has a whole lot of projects coming up.

How did “Different,” your song with Riky Rick and Emtee, come about?

We were in this other studio in Braamfontein called Blueprint. We had come there for a session for Emtee, to record some songs for his [upcoming] project Logan. While we out there, they didn’t really play lit beats, so I had Young2un beats on my phone. So I played Emtee some of the beats, like, I got some fire on my phone, we can at least record on these. So I put them on a computer, and then he chose the specific beat. He’s like, “I already got the hook, let me do it.” I laced a verse after him doing the hook. As I was about to record the second verse, I was sitting with the song, and in my head, I saw a picture of Riky.

So, at this other one show that I was headlining at, while I was performing on the stage, I saw him in the crowd going crazy, like, “Oh yeah, repeat that song. You’re on fire, bro!” After that, he was like, “You can hit me up anytime, anything you want to do with me, we can get to it, as long as it makes sense.” So, I sent him the song. I’m like, “Yo, bro, please hop on.” He’s like, “Trust me, I’m going to do that real quick.” He recorded the verse a week or so later. He sent everything including the seps, everything at once so that I don’t have to call and ask for them. So that’s how it came about. He just said he has my back.

What does that co-sign coming from Riky mean to you?

Everything. It means everything. I like Riky Rick, I look up to him, he inspires me, and how he does things. So for him to approve me at that exact moment, it meant everything to me. It was everything.

How did Emtee, Saudi and Sjava’s departure from Ambitiouz Entertainment affect ATM?

It did not. It did not affect it. It just made it better. Because when they were still at Ambitiouz, if Emtee had a gig, I couldn’t be at that show because this man [owner of Ambitiouz Records] doesn’t want to promote me because I refused to sign to him. But now we can make shows together. So, the company came in between us. At my launch, I had almost everybody from ATM. That had never ever happened before; an all-ATM show just everybody under one place, it had never happened before, because of the middle man.

As a collective, does ATM have any plans of releasing a project?

A whole project from all the old stars of ATM is coming. We cooking. We working, we forever working. We don’t really sit down and say, “Now we’re working on a certain project like this.” We just make the songs together. And then the time comes when we have all the songs in one place, just like how we made 3 Way, we didn’t sit down and say we’re making Three Way. Every time I’m in the stu, I record a verse, this guy puts a chorus, that one puts a verse, then I get to the studio, the song is done. I know people who have recorded and they left a space of a verse for me, like I’m going to do that. So that’s how we work. Every time somebody is in studio, they leave something, so that when the next person comes they can put something in.

You rap in siSwati. Why do you think it has taken South Africa this long to have a big Swati rapper?

Man, the best Swati rapper ever passed away, that’s why it’s taken them so long. Swati King Kong. He was king. That’s the rapper I’ve looked up to, that’s the guy I want to be when I grow up, I want to be SK, I want to be that guy. He passed away in 2014, if not 2015. He’s actually the glue also of this whole ATM thing, because he started this thing with Ruff. So, it was the two of them that put all of us on. So everybody else is here because of those two people. Unfortunately, he passed on before we became something.

So you’re sort of carrying the torch?

Yeah. That’s the guy I want to be. I’m trying to be that guy, so wherever he is, he can be proud of me. It’s sad to know that if I can be at my peak, and really be the best in this thing, I can never hear, “I’m proud of you” from him. So, that’s why we haven’t had the best Swati rapper in South Africa, because all the Swati people, when they come from Nelspruit or wherever, and they get here, they customise themselves into being Zulu, Xhosa, or whatever. They blend in.

And why did you choose not to do that specifically?

Because I’m not Zulu. I’m not Xhosa, or whatever. I’m Swati, bro. That’s me. I’m not trying to fit in. And I know it’s hard for people to accept something they don’t understand. That’s why also I feel like it’s taken me this long. Nobody knows how long it’s going to take them to stomach something and relate to it, but we’re getting there, I guess. Their perception is different now. Everything is different.

2 Arrested in Killing of Man, 73, at ATM in Falls Church – NBC4 Washington